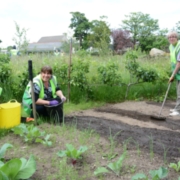 As the preparations get under way for COP26, Pete Ritchie, Executive Director at Nourish Scotland, sheds light on the tools that can be harnessed at a local level to create more equitable food systems.

As the preparations get under way for the COP26 climate conference in Glasgow, local authorities across the UK are planning their contribution.

Of course the formal negotiations will be between national and supranational governments.  Will the US, China and the EU align on cross-border carbon taxes? Will enough money move from the countries responsible for global warming to those most at risk from its impacts? Will guidelines on managing climate risk in the financial sector start evolving into regulation?

But while global action is essential, the changes we need to make to halt global warming will be lived locally. How we rethink mobility, so that we don’t simply swap diesel cars for electric ones; how we rethink waste so that reduce, reuse and repair are the norm while collect and dispose are the exception; how we build much needed housing with net zero land take – all these changes affect people’s day to day lives.

Trust is a key ingredient in making these changes work.  People have to trust government, believe that there’s a credible plan, and feel their concerns are heard.  This is where local government matters.  Surveys show consistently, not just in the UK but globally, higher trust in local than in national government.

Food is personal, cultural and contested.  It is abundant yet for many out of reach.

During the pandemic, local authorities moved into the business of food distribution in a way not seen since wartime rationing. And yet we saw inequality in sharp focus, with demand for food banks increasing while the legacy of dietary inequality left people more vulnerable to COVID.

Something else happened, too.  The just-in-time supply chain frayed. And though it didn’t break, cities and towns in the UK and across the world looked out at the fields surrounding them and wondered why they couldn’t buy local food.  How could it be that almost everywhere it was easier and cheaper to buy food from ‘over there’ rather than ‘here’? Of course, local farmers responded where they could – and many convenience stores set up new local supply chains almost overnight.

This is why Nourish Scotland and its many partners developed the Glasgow Declaration on food and climate.  The local and regional governments signing the declaration are making a commitment to integrated food policies to tackle climate change.  In terms of reducing emissions, that means reducing food waste - one caddy, one school and one hospital at a time.  It means less meat and dairy, more vegetables and fruit. It means public procurement leading the way.  It means more urban food production, and returning nutrients and organic matter to urban and peri-urban land.

But an integrated food policy goes much wider than this.  It’s about equity – reducing the huge differences in choice and quality we take for granted in the UK.  There’s no point telling people to eat more veg and fruit when they are unaffordable for the households which would benefit the most.  It’s about health – how children can have the best possible nutrition in the first 1000 days, how people with long-term health conditions can stay well, and about reshaping the food environment so it’s easier to eat what we need.

It’s about building community through food and gardens.  It’s about how we teach our children about food systems. It’s about creating fair work and good livelihoods across the food system. It’s about having a positive impact on the wider environment, whether that’s fair trade, or sustainable fish, or converting to organic food in the public kitchen.

Through integrated food policies, local councils can work with their residents to paint a picture of a food system which is not just greener, but also fairer, healthier and smarter.  They don’t have all the powers they need to deliver this – though some have more than they use: which is why the Glasgow Declaration also calls on national governments to align with and support their local governments.

Local and regional authorities across the UK and globally have been ahead of national governments in developing progressive food policies.  Whether it’s Ghent’s Veggie Thursdays, or Vienna’s urban horticulture, Oaxaca’s policy on junk food,  Andhra Pradesh’s conversion of the whole state to organic farming, Parma’s leadership on food waste, London’s junk food advertising ban, San Francisco’s push on composting or the small city of Mouans-Sartoux converting its canteens to 100% organic – it’s been local authorities which have innovated and taken their citizens with them.

The UK has a network of Sustainable Food Places and Glasgow is polishing its new City Food Plan ahead of the COP.  As November approaches, we are encouraging local authorities in the UK and globally to sign the Glasgow Declaration and to take part in a high level food systems event during the conference.  We are also keen to support local ‘food and climate’ events – we won’t all be able to get to Glasgow, and these events round the world can link up to send a clear message to Glasgow.

Last, but not least: the transition to a more sustainable food system affects farmers most of all.  So Nourish Scotland and partners are hosting conversations between farmers and local governments ahead of and at COP26 to look at how these two groups at opposite ends of the food chain can work together for a better system.

In a sense, none of this is new. Local Agenda 21 goes all the way back to Rio in 1992.  And local government still matters.

Pete gave a presentation on this topic at the APSE Scotland Soft Facilities Management Seminar 2021. To watch the highlights of the event and download Pete's presentation click here.