APSE Senior Consultant Paddy Knowles was recently invited to Lyon, France, to learn more about how underground refuse storage systems are being used and developed by other European countries.

APSE Solutions recently carried out extensive research into underground refuse storage systems (or URS systems, as they are known), during which I was kindly invited to the London Borough of Tower Hamlets where a housing association, Poplar Harker, showed me around their installation of URS systems. Following that trip, APSE was invited by Plastic Omnium/Sulo to attend the Pollutec 2016 exhibition in Lyon, France. I was also invited to visit their research and development facility, and their manufacturing plant in Lyon to see both the above ground rota moulded recycling containers and the Iceberg-type URS systems, like the units being used in Tower Hamlets.

The Pollutec Exhibition, not unlike the Recycling and Waste Management Exhibition held at Birmingham’s NEC in September each year, brings together waste, recycling, water and energy professionals from across the world. It showcases the latest products and invites discussions on innovative solutions to issues across the environmental sector.

It was clear from the discussions I had that many European countries are currently far more advanced in their use of innovations like underground systems than we are in the UK. One of the striking things I found at Pollutec was how many different manufacturers there are throughout Europe, each with a variation on products following the three main types of URS available; Molok, Iceberg or Sotkon systems. Not only that, they have a much wider choice of design and a variety of different systems available to them. In comparison, the UK has perhaps two or three main suppliers of URS systems. It is clear that we still have a long way to go. 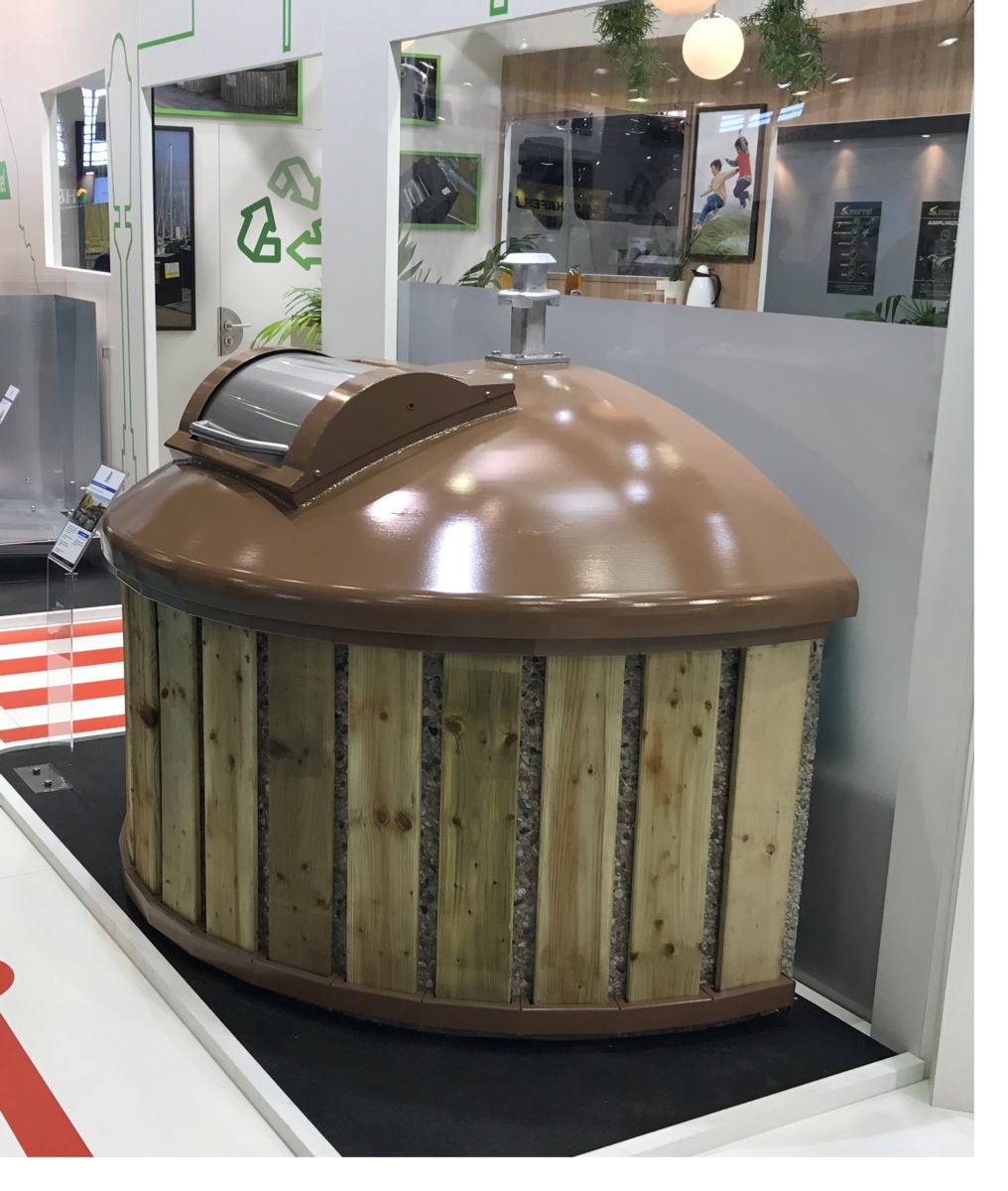 One of the noticeable differences between the European above-ground containers and those used in the UK was the vast array of different and modern designs. UK bins, though not all, are typically designed in a very conservative and practical way. Our European counterparts seem to prefer a more flamboyant style of bin, with a varying number of designs and styles available, which I have to say I found to be very interesting. It is also true to say that this apparent European flair for bin design is also apparent on the URS pillars (the bit above ground that you place your waste into), again with many different shapes and designs available to them.

In France and, I was given to understand, in many other European countries, there are a large number of municipalities/authorities, already using URS systems. More are looking to move down this route, including retrofitting them into existing areas.

There appears to be two main types of URS; the fully underground type, which uses a pillar or litter bin-type opening above ground, (usually the iceberg or Sotkon design of URS) or a partial underground unit, which stand out of the ground by about 1 metre and usually follows the Molok style but can utilise either the Molok-type bag system or hard casing in either plastic or metal.

They have a range of portals for residents to place their waste through, including a rolling barrel system that acts as a safety system to stop people climbing into the container. There is also ample space for clear user instructions to be placed on them.

Day two saw a visit to Plastic Omnium/Sulo’s newly-built research and development centre, located close to the airport in Lyon.

There, we saw a number of potential innovations and management systems. Unlike the UK, many of the municipalities/authorities in France in particular, operate a ‘pay as you throw’ system for domestic and commercial waste which, along with collection routes, monitoring, complaints and invoicing for the collection as well as many other aspects of the service, are managed through their specifically-designed management system (OPTINET).

We then moved onto the factory unit Metroplast, located about an hour’s drive from Lyon. This location also had a display area showcasing many more bin designs, with much of the range available to view.

After booking in and observing the correct health and safety protocols, we moved onto the factory floor. Although it was obviously a workspace, I have to say it was not oppressive, noisy or dirty as might be expected from a manufacturing plant. In fact, it looked like a very nice space to work in; clean, organised and calm.

We were shown around by Julian Talagrand, the plant manager, whose knowledge of the product range and operation was excellent. It was extremely interesting to see the process of building a URS from start to finish. The units are assembled by hand by very skilled operatives, who are able to make the units quickly. One of the most interesting systems was the new Rotomax semi-underground unit. As many of the semi-underground systems do, this one follows a similar principle to the Molok system, but with a steel inner casing with bottom opening doors. 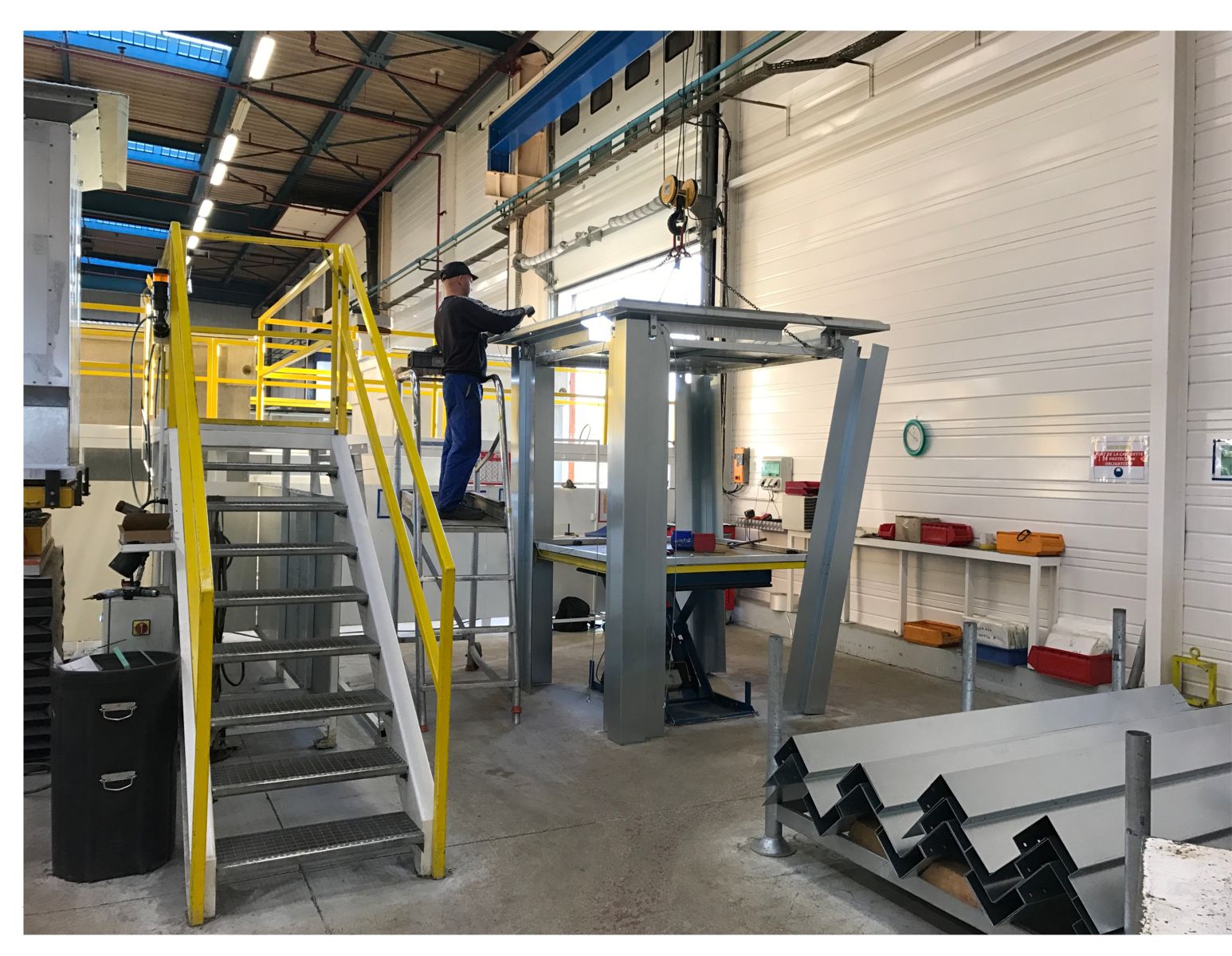 Units are assembled – minus the pillar – with the hole covered to stop water entering the unit. The pillar is then chosen by the client and attached before installation. Producing them in this way also allows for easier transportation.

This trip only highlighted that the UK has much more to learn about waste management from our European counterparts. We need to look beyond what we perceive as the obstacles to using and installing URS systems in both new and existing build areas. We need to consider the long-term benefits of how they could improve not only the immediate amenity of a given area, but also the effect that they can have on the overall cost and efficiency of the service.

Over the last 12 months, APSE Solutions has carried out extensive research into how URS systems can assist UK authorities by improving the efficiency and cost effectiveness of both domestic refuse and commercial waste services. We are available to assist authorities wishing to look at the potential for efficiency savings offered by using this type of system.