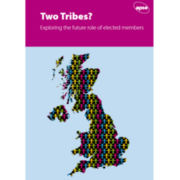 A survey of local councillors, published this by the Association for Public Service Excellence (APSE), has revealed sharp contrasts in attitudes between those in decision-making and 'backbench' roles.

The study describes the existence of 'two tribes' among local politicians - with opinions on matters including local government political structures and capacity to improve services split according to roles rather than political persuasion.

The report, ‘Two Tribes? Exploring the future role of elected members’, suggests fiscal austerity has taken its toll on councillor confidence. Belief in capacity to further improve services had fallen dramatically since the 2003 survey; and while 87% of executive members believed they personally could contribute to improvements, only 43% of backbenchers thought they could do so.

The survey looked at proportion of time councillors spend on different activities, including representing local communities, dealing with complaints, scrutinising services and partnership working. The authors raise accountability concerns because only a minority of elected members spend a high proportion of time representing their authority on public-private and public-public partnerships, despite believing them necessary as a funding source.

The study also echoes recognised concerns that the average age of the councillors was 60, only 29% were women and only 4 % from an ethnic minority.

Having highlighted a need to reconnect all elected members with decision-making, the report suggests how the 'Ensuring Council' ethos, developed by APSE and its research partners and outlined in the report, could help underpin democratic accountability.

Paul O'Brien, chief executive of APSE, commented: 'Any dialogue on the future of local government needs to be grounded in a set of principles that genuinely advances local political leadership and democratic accountability. The Ensuring Council ethos offers a way of triggering that constructive dialogue.'

Professor Steve Griggs, one of the authors of the report said: 'From the results of this survey, local government appears increasingly structured by a polarisation akin to a tribal affiliation whereby executive and non-executive members hold different viewpoints and undertake different tasks. This cleavage is a cause for concern.

O’Brien added 'Councillors that exercise executive decision-making powers, or those in waiting to occupy such roles, expressed persistently different views from what we might term ‘backbench’ members, regardless of political persuasion. Party groups are a means whereby any potential divisions were mediated, but the poll raises questions as to whether the party group is up to the task of restraining the institutional drivers of the modernisation agenda. This study shows there is a need to find a way to better recognise the contribution of councillors who may be focused on serving their communities but feel disconnected from decision-making’.

To order the report, please use the online form or complete this attached form and return to Wlee@apse.org.uk or by fax to 0161 772 1810.

For further information or press copies of the report, please contact Mo Baines, head of communications and co-ordination at APSE. Email: mbaines@apse.org.uk or tel: 0161 772 1810

1) The Association for Public Service Excellence (APSE) is a not-for-profit membership organisation dedicated to promoting excellence in the delivery of frontline services to local communities, which works with more than 300 local authorities across the UK.

2) The study was undertaken by the APSE in partnership with the Local Governance Research Unit at De Montfort University and the Centre for Local and Regional Government Research at the University of Cardiff. The research team brought together Professor Steven Griggs, Dr. Melvin Wingfield, Professor Colin Copus (Local Governance Research Unit, De Montfort University) and Professor Steve Martin (Centre for Local and Regional Government Research, University of Cardiff).

3) The study evaluated long-term changes in the practices and attitudes of councillors towards local political leadership. It repeats a 2003 survey undertaken by APSE in conjunction with the Centre for Local and Regional Research in Cardiff Business School, which led to publication of The Future Role of Elected Members, APSE's 2003 report, thereby offering longitudinal data on the changes over more than a decade. A total of 2,577 elected members from across the UK took part in the 2014 online survey, a response rate of 15%.

4) Labour government’s local government modernisation agenda, enshrined in the 2000 Local Government Act, introduced new political management structures. It replaced the existing committee system in England with a formal cabinet and overview and scrutiny system with the aim of swifter and more transparent decision-making where those responsible for decisions - the cabinet and leader (or mayor) – could be clearly identified and held to account by councillors acting in scrutiny committees, and communities acting in neighbourhood arenas. Local authorities in Wales moved towards such cabinet systems, whilst councils in Scotland, like those in Northern Ireland, retained the committee system, although a number of local authorities in Scotland have recently adopted cabinet-style executive systems.